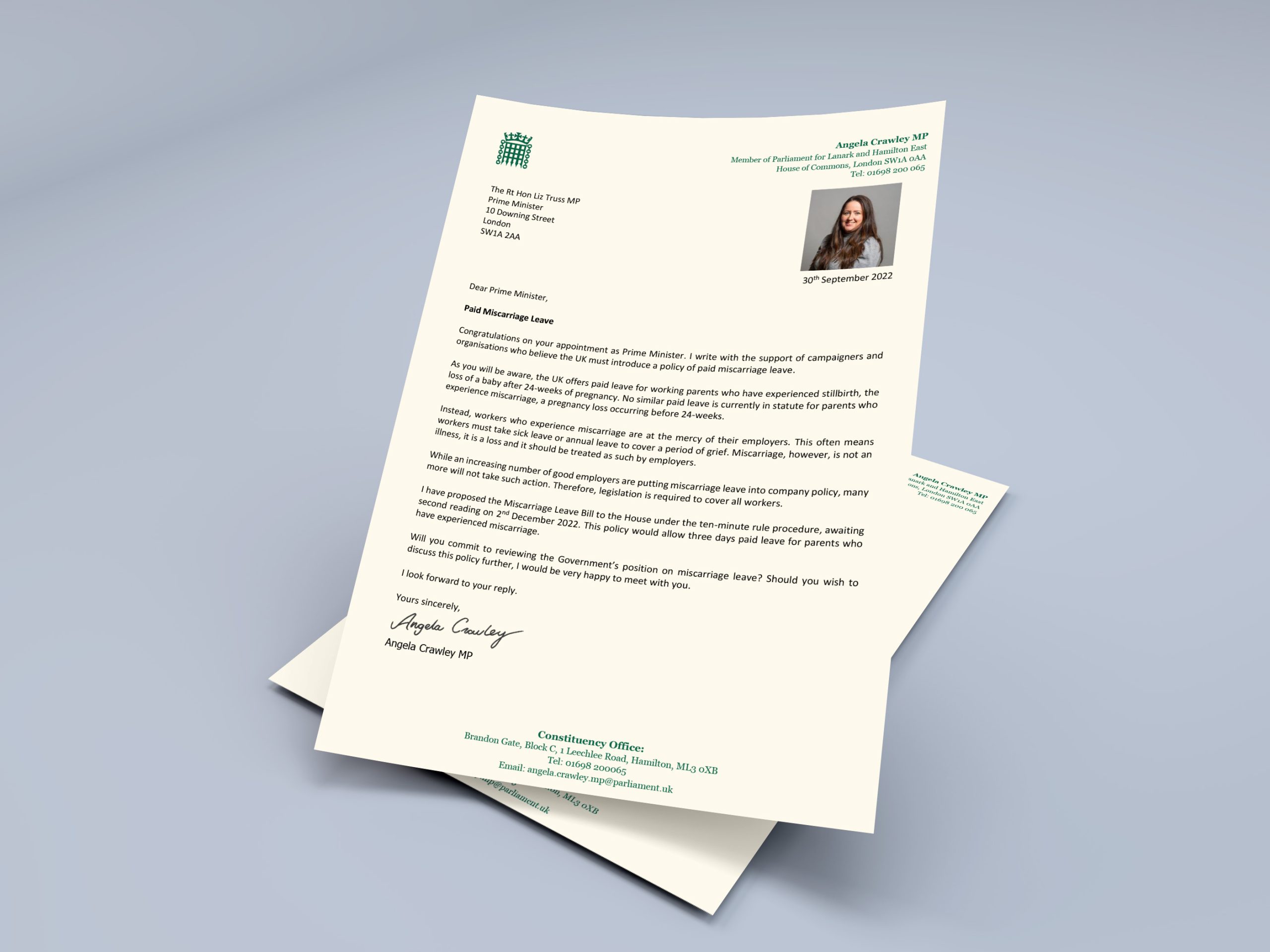 Campaigners have joined more than 40 MPs in calling for the UK Government to support the Miscarriage Leave Bill.

Introduced by Lanark and Hamilton East MP Angela Crawley under the Ten Minute Rule, the Miscarriage Leave Bill would introduce a statutory right for parents to a minimum of three-days paid leave in the event of a miscarriage, ectopic pregnancy or molar pregnancy.

Ahead of the bill’s second reading, Angela Crawley MP has written to new Prime Minister Liz Truss and Secretary of State for Business, Energy and Industrial Strategy Jacob Rees-Mogg.

The letter has been supported by 50 MPs from eight parties and independents as well as the Miscarriage Association, Mumsnet, Miscarriage Support, the Ectopic Pregnancy Trust, Tommy’s, Sands, Morgan’s Wings, SIMBA and campaigner Keeley Lengthorn.

Up to one in four pregnancies will end in miscarriage however, there is currently no provision in place to support grieving parents through their loss before 24 weeks of pregnancy.

Countries including Australia and New Zealand have already introduced paid miscarriage leave and Northern Ireland is set to do so before 2026.

“A new Prime Minister brings a change to the heart of government and with that there is an opportunity for them to review and change their stance on miscarriage leave.

“My Private Members’ Bill will return to the Commons in December and I am hopeful that the new government will get behind it and support parents who experience miscarriage.

“By providing a statutory right to paid leave in the event of a miscarriage, we can challenge the stigma and allow parents to properly grieve their loss.

Miscarriage Association National Director Ruth Bender Atik added: “For many people, miscarriage is the loss of a baby, however early it happens, and is often felt as a bereavement like any other.

“A period of statutory leave would not only allow people some time off to start their recovery, but it would also be a clear public recognition that pregnancy loss can have a very real and significant impact on those going through it.

“We wholeheartedly support this bill and hope the Government will take this opportunity to support people at a what can be an extremely difficult and distressing time.”

The Miscarriage Leave Bill will receive its second reading on Friday 2nd December 2022.